I’ve always liked the SaGa games, and RS3 is no exception. But by and large they’re not for everyone, and RS3 is no exception. Quests not only require effort by the player to complete but also to simply locate, and you are, by and large, dropped into a fairly large world with a general objective (one that differs depending on which character you choose to play as) with little direction on where to go and what to do. It can be quite daunting, but it rewards those who stick with it.

Along the same lines as the nonlinearity of the gameplay is something that scares players substantially less: a nonlinearity, of sorts, of the characters you get. They all start with base statistics and "favored" abilities — Katrina, for example, is particularly skilled with Big Swords — but you can turn just about any character into anything you want them to be, and the "level up" system inherent in SaGa titles since the original on the old greenscreen gameboy has supported this.

Graphically, RS3 is about on par with Final Fantasy 6, but it varies. Some of the areas are absolutely beautiful, but some are fairly bland. It’s a bit of a tossup, really. The monsters are exquisitely detailed, however, and some of the effects in battle are a joy to behold.

It should be noted, of course, that SaGa games are known for their difficulty. While the very first was not particularly hard (especially since you could use the Saw on the final boss and kill it in one hit) the second took this reviewer well over a year to beat. While RS3 is not -quite- this tough, I cannot see myself defeating the final boss at any time soon. Even the four major bosses and some of the more "minor" bosses are substantialy harder than you’d normally expect, even with a fair amount of character stat boosting.

RS3 is not for everyone. It can be hard to figure out what to do next, hard to build your characters up, and hard to progress against David-and-Goliath bosses. But if you like hard or open-ended games, give it a spin and you might just be pleasantly surprised. 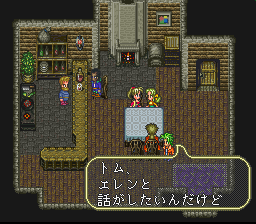