The 32-Meg quest begins.The millennium. A portal is opened. The chain of time is broken. A young man is transported into the past, altering the course of history and the outcome of the future. He has to find his way home, but first he must travel to the outer edges of time to repair the world's chronology.
On the way, he encounters strange friends and foes, utilizes incredible devices and vehicles, and penetrates and neutralizes the fortresses of the past, present, and future. A paradox has been created. If he does no restore the order of time, nothing will ever be the same. He is the one who will become a hero. He is Crono.

Classic time-traveling Squaresoft RPG with some of the best graphics and music of its time.

Although Chrono Trigger is a tad overrated, it is still quite a marvelous RPG. It features a huge sprawling quest, multiple characters with different skills, excellent graphics and music, and an ATB battle system that features a wide assortment of spells and even combo attacks! The game has many different endings for replay value, and you can restart with all your items and experience from previous games.

Spiez - # 2006
I don't think Chrono Trigger is overrated at all. I can't think of many RPGs on the SNES, or even on modern systems, that can rival Chrono Trigger. Awesome story, music, graphics, characters, battle system, replayability... the list goes on. The only SNES games I'd even put on the same plateau with Chrono Trigger are probably Seiken Densetsu 3 and Front Mission... maybe Final Fantasy VI and Star Ocean. Bottom line--Chrono Trigger is the benchmark for Japanese-style RPGs.

Apparently, some text referring to demons, alcohol, etc. and possibly some plot-related text as well, were cut out of the English release. An unofficial re-translation is being worked on at the Chrono Compendium (as well as dozens of quality fan-made games and hacks).

Nobuo Uematsu stepped in to finish the work of Yasunori Mitsuda when Mitsuda was unavailable due to temporary health issues aggravated by self-imposed overworking. 54 tracks are considered to be by Mitsuda while 10 are entirely by Uematsu.

was remade as
Chrono Trigger (PS) 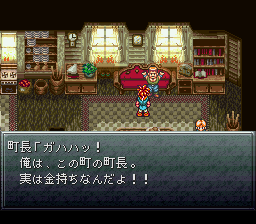