One of the greatest RPG's ever made for SNES. It comes in English and a few other languages, like French, German and Spanish.

Once upon a time, the power of Mana was used by all people and helped their civilization grow. But as evil forces took control of Mana Fortress, there was no way out but a war which destroyed the Mana-based civilization but eventually brought peace to people. The events of the past became but legends to the new generation of humans. But history repeats itself... One day, a young village boy finds a rusty sword stuck at the bottom of a river. He doesn't know this sword is the famous Mana sword, the one that won so many battles before. By drawing the sword out of the river bottom, the boy unwillingly summons hordes of monsters, and is expelled from his village. A mysterious knight Jema is the only man who helps him and gives him instructions for the future. First, he must repair the sword, and then, with its help, take control of Mana seeds which can be found in eight great castles.

# 2014-08-07 03:18:52 - official description
Good and evil battle for a young warrior's heart. There is one force in the universe that keeps good and evil in perfect balance. It is called the tree of Mana. But a magic sword has tricked a young warrior into upsetting this balance, spreading evil throughout the land. Thus, the warrior must undertake a dangerous journey to find the seeds of the Mana tree, which have been hidden for centuries. Only then can perfect harmony be restored. In this incredible adventure, things are not as they seem. Magic swords release evil as well as fight it. Treasure chests hold booby traps. Monsters are friends and friends are enemies. Potions give power, black magic takes it away. Dragons fly, weapons change. It's a world turned upside down that you must help the warrior make right. And the only way to succeed is to solve the Secret of Mana.

Tags
While developed as the first game in the Seiken Densetsu series, it ended up becoming the sequel to Final Fantasy Adventure. Each player (up to 3) controls a member of a cooperative group. Uncontrolled characters are played by computer AI according to strategy set by the lead player. There are sprite like characters in the game. A good portion of the game takes place in forest areas. androgynouscharacter? There are rooted and unrooted plants that move rapidly to attack the player. There are unrooted plant based creatures that move freely as if they were an animal. Ther are sprite like beings in the game. Killing enemies gains personal experience points for a player but a strike gains points for the skill level of the weapon that are holding during deed.

Sequel to Seiken Densetsu (Final Fantasy Adventure). Possibly one of the best games for the SNES.

According to FuSoYa, SoM was cursed with an ugly stretched font and limited space for story dialog. In other words, you should really play this game with FuSoYa's VWF enhancement patch. It greatly expands the story dialogue and just makes the game look so much better. Check out the before and after screenshots on his site and decide for yourself at FuSoYa's Niche.

(cjlee001) - # 2006
Ahhh, old school SNES RPGs... aren't they great? And Secret of Mana (henceforth SoM) was, and indeed still is one of the best. An action-orientated RPG along the same lines as the equally wonderful Zelda games, SoM is one of those games that I can keep playing through without getting bored. The plot is good, if a little unoriginal, and it has a great multiplayer option, a rarity in SNES RPGs.

The original Seiken Densetsu 
Before being published for SNES. This game began as an NES game. It was completed as a SNES CD-ROM game. 

influenced by
Seiken Densetsu: The Emergence of Excalibur (NES)

ported to
Secret of Mana (iOS) 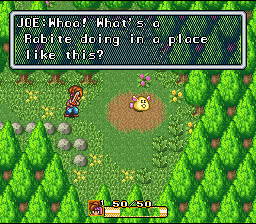