Incorporating the same adventuring viewpoint and battle interface that made the original Breath of Fire so popular, Breath of Fire II became an instant favorite among RPG fans when it was released for the Super NES back in 1995. Breath of Fire II features four new fighting formations, which allows for greater control and strategy in battle. Adding even more depth to the series, players can combine their party members with Shamans to create enhanced characters.

# 2013-06-15 16:46:07 - official description
Featuring a wide range of characters and personalities and a vast, endless world to explore, Breath of Fire II is the sequel to the original smash-hit role-playing game. In a world set 500 years after the previous installment, in a frontier village known as Gate, the father and sister of a young boy known as Ryu are suddenly abducted. Strangely, all the villagers appear to have completely forgotten everything about the incident, and Ryu has instantly become an orphan. At a church, Ryu meets Bow, another orphan in a similar predicament, and they slip away from town together to begin their adventure. Take advantage of the multiple game-play viewpoints found in the game (such as the quarter-view perspective during battles that made the original game so popular) to use exciting abilities like shaman fusing and dragon transformations and help these two heroes complete their mission.

This is a traditional RPG, and doesn't really do anything drastically different from other games in the genre with the battles. Enemy encounters occur at random while you are walking on the overworld, or when you're going through an area such as a tower or a cave. By looking at your menu, you are able to get a rough idea about how many random battles there are likely to be in the particular area you are in. Though they occur more at some areas than others, there will be many enemies to fight. This can become frustrating, particularly when you are in a confusing area or maze.

# 2006
Another classic RPG that was butchered by Nintendo during translation. An unofficial translation with improved graphics and cosmetic modifications is being worked on here (they also have a completed German translation):
bof2.blogspot.com/

sequel of
Breath of Fire (SNES)

was remade as
Breath of Fire II: The Fated Child (GBA) 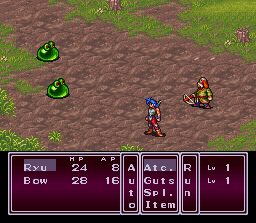