J.R.R. Tolkien's The Lord of the Rings Volume One

Nope this isn't a misprint. It is not a new game for an old console. This game was for the old LOTR cartoon movie (anyone actually WATCH that??) which was fated to have no sequel.

This is NO Neverwinter Nights. It has a very simple interface (TOO simple sometimes) and NO you CAN'T walk around invincible wearing the ring like in some other games. 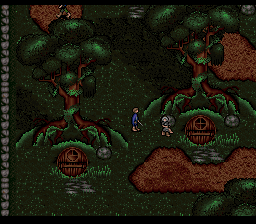 J.R.R. Tolkien's The Lord of the Rings Volume One in-game screen.