While some thought it would never be possible, DONKEY KONG COUNTRY is here for the Super Nintendo in all of its glory. Play as Donkey Kong and his good buddy Diddy Kong as they attempt to reclaim DK's stolen banana hoard from the wicked King K. Rool and his vicious Kremlings.

# 2013-10-02 17:01:14 - official description
Donkey Kong Country is an incredible island adventure, and the first game to feature Donkey Kong's sidekick, Diddy Kong . Challenged by the crazed tribe of reptilian Kremlings, the Kongs face their cunning adversaries armed with lightning-quick moves, chest-pounding muscle and awesome aerial acrobatics. The duo also gets help from a host of friends and family, from Funky Kong , Cranky Kong and Candy Kong to Rambi the rhino, Expresso the ostrich, Enguarde the swordfish, Squawks the parrot and Winky the frog. This game has more than 30 levels, plus dozens of hidden caves and secret rooms - more than 100 areas in all. Help the Kongs recover their stolen banana hoard!

Donkey Kong Country hit the SNES with a big impact when it was released back in 1994. That's also when people started recognizing the company 'RAREWARE'. Donkey Kong JR.(from the original Donkey Kong Junior for NES) is on a quest to find his banana hoard stolen by the kremlings. The Original Donkey Kong, which is now Cranky Kong, makes an appearance in this game, and gives you tips and hints(for a fee, of course).
You must be wondering,'Why is this game is big? Why did it have a big impact on the SNES?' Simply put, it was revolutionary. It was the first game of its type. It boasts highly advanced graphics for the SNES. RARE, along with POWER ANTIALAS tools, created 3d models, which were then converted into sprites with shading. There are many weather effects, such as rain and snow, and the backgrounds are gorgeous. But the game's graphics really shine in the character's smooth animation. Since they were, to begin with, 3d models, their animation is very smooth and correct.
Donkey Kong Country also has unforgettable music. I'm sure the tunes will be stuck in your head all day long. Unlike other games where it seems as if they just plopped random notes down at places, RARE took the time the fine-tune the music, making it very exciting and memorable.
Aside from graphics and music, this game also boasts very great gameplay. the controls are easy to master, and they respond instantly at the press of a button. This is very important in later levels, when the challenges become tougher.
RARE did a great thing by adding what most games lacked, a map screen! Yes, with the map screen, you can easily travel between levels, replay the ones you like, or just go back and earn 1-ups.
Another neat feature is the ability to complete the whole game. By this, I mean RARE has given you tasks in each level you must complete. These tasks are in the form of mini-games. See if you can achieve all 101%(Believe me, it can be quite a challenge)!
If you're the type who enjoys playing with other people, then you can select from two different multiplayer modes: Team and Competition. In team mode, one player takes control of Diddy while the other takes control of Donkey Kong. In competition mode, there are two different sets of Kongs, the original and the Kongs wearing the yellow ties(the tie makes a whole difference!).
All in all, I would say Donkey Kong Country is a masterpeice. You can easily see how much time and effort RARE put into this game, and they didn't skimp on the detials. Some say this game rivals PSX games, and they're right. This game is still fun and challenging, years after it was released! 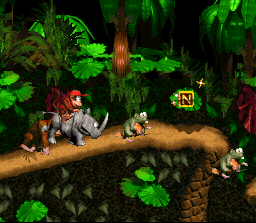