An excellent racing game that's easy to pick up, but somewhat difficult to master. Considered a classic by some, Rock N Roll Racing flew under the radar of most gamers due to minimal publicity. With a combination of interesting characters, a post-apocalyptic sci-fi feel, running commentary by "Loudmouth" Larry Huffman, a series of cars that could be purchased and upgraded as you win cash, and a classic rock soundtrack, it's hard to dislike the game. Just watch out for missiles from behind!
[Jacquismo]

Published by Interplay in the USA
Published by Namco Limited in Japan.
Published 2014 on Battle.net by Interplay for play on Windows (This version is slightly different from the original). Once extracted from the zip, ROCK.BIN loads and runs fine on ZSNES in MS-DOS, FreeDOS, Mac, and Linux (and maybe Xbox too). This game is not Freeware. Blizzard retains full copyright and the downloaded version includes and EULA restating Blizzard's ownership. No right to redistribute or otherwise treat this version as Freeware is granted by Blizzard.

A remake of Racing Destruction Set. This game was also preceded by the similar RC Pro-Am. Race on isometrically viewed tracks constructed from a limited number of pieces of the same width.
Improvements over RC Pro-Am include:
Three levels of difficulty.
1 or 2 players simultaneously via split-screen.
An additional 1-2 player verses split-screen mode.
Armor/Hit points (vehicles don't explode with only one hit).
Collisions cause damage at all times.
Only money and armor repair power ups are collected from the track. All other upgrades are purchased between races.
Nitro device, jump device, homing missile device, Oil slick device.
3 devices at once. Ammo limited to a maximum of 6 charges per device. Ammo is filled to capacity each lap.
Hovercraft and tracked vehicles added.
Non-flat tracks. Catching air and leaving the track. Jumping over opponents. One way jumps and gaps in the track.
Multiple track surfaces with different properties.
Vehicles can shoot or mine themselves.
Crisscrosses and multiple paths for some tracks.
Game has and ending and is 'beatable'.
Sufficient skill to continue playing is determined by a system of racing points and divisions instead of limited lives and continues.
Water obstacle is replaced by sticky goo obstacle.
A password save function. Passwords are universal and work on original SNES version or Genesis version.
Commentator, Loudmouth Larry
This version of the game features these songs:
Paranoid by Black Sabbath
Born to be Wild by Steppenwolf
Bad to the Bone by George Thorogood
The Peter Gunn Theme by Henry Mancini
Radar Love by The Golden Earrings

RC Pro-Am features not include:
Collecting all powerups from the track.
Lives and continues.
A trophy room.
Invincibility powerup.
Rubberband and nitro powerups for AI opponents when they fall behind. It is possible to lap opponents.
AI opponents upgrade their vehicles on a schedule instead of matching the player's choice. So upgrading is an advantage.

Quirks:
Passwords only save 6 digits of cash, if you acquire more than that, only the last 2 digits are saved. So $999,950 is saved but $9,999,950 becomes $50.
Some created passwords can cause the game to crash at random.
You may enter the same password for players 1 and 2 at the same time.
Dirty connectors or cheat devices can cause the game to play in different mode where all powerups can be collected from the track. Presumably this mode was part of an earlier version of the game that was not fully removed before production. This 'powerup mode' crashes randomly.

Start/Pause = Enter
Select = Right Shift (disabled?)
Toggle Fullscreen = Alt-Enter
Exit = Quit
RnRR was not Interplay or Silicon & Synapse's first attempt at remaking Racing Destruction Set. 2 years earlier they had created RPM Racing. "RPMII" was the working title of RnRR. Notably, RnRR does not include a track editor or save RAM; both of these features were available in RPM Racing. 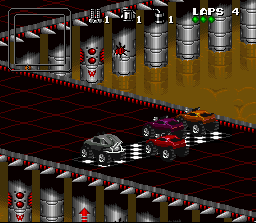