Go to Hell and back in DOOM, as you battle through 59 levels of infernal action. Use pistols, chainsaws, shotguns, chain guns, rocket launchers, plasma rifles, and the BFG-9000 to blast demons, mutant spiders, possessed marines, and other creatures of the night. With a higher framerate and ambient light sourcing, DOOM has never looked better. Take a trip to Hell and keep the demons from taking over the Earth in DOOM.

There are conflicting reports about development of Doom for SNES. John Romero says Sculptured Software developed it completely in secret and brought a finished product to id. However, multiple witnesses in print describe a SNES version being developed at id software. Id mainly developed their version on a NeXT 68k system the used and Apple IIgs to compile the code. Sensible to efficiently produce optimised code since IIgs has much more in common with the SNES than any 68k system; mainly, the IIgs and SNES use the same CPU. It is clear that there were two versions and that id's in-house version was scraped when Sculptured Software (Randal Linden) presented their's. On the other hand, one wonders how Sculptured Software managed to do such a good job with the doom source code (which was still proprietary at the time) if it was done secretlyRandal Linden rules.

Well, Randal Linden has set the record straight and proven it by releasing his source code (or, a version of it). He set about _creating_ Doom for the Super Nintendo. Not having access to any version of Doom source code required him to resort to publically available information and study of the DOS version directly. He quickly realised he'd have to use the SuperFX2 to have a chance of success. Basically, Doom required too much math for the SNES cpu. He didn't have access to a SuperFX2 development kit (there never was an official one?). So he created that too using an Amiga with a modified Star Fox cartidge wired in and SNES controllers adapted to the paralell port. He made cuts and clever hacks to force decent performance from the SNES and SFX2 chip. Some things that were rendered and calclated as needed for most versions had to be pre-rendered and pre-calclated for the SNES. This contributed to the filling of 16Mbit of ROM in the cartridge and some levels had to be removed. The SFX2 chip was incapable of seeing more than 16Mbit (this would later be overcome, but not by Linden nor before SNES Doom's release). Linden's version includes SNES Mouse support (which should work) and XBAND support (which would have worked). References in the source are made to the Super Scope but support was appearently not actually implimented (or removed from the final version). 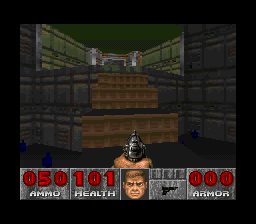