In this platform/puzzle mix you control a brave knight trying to rescue a princess which is trapped inside a huge castle. The way to the princess however is blocked by doors. Many doors. So your main objective is to collect keys with the appropriate colors to make progress. Although you start with 50 lives (at least in the US version) the game is not easy. Pixel-perfect jumping is needed and there is the constant threat that you run out of keys and trap yourself. This is also my main complaint about this game, cause it tends to become confusing and frustrating. And your only attack (with a knife) has a much too short range. As with many early ASCII Famicom/NES games this game originated on MSX homecomputers. The rooms of the castle are bigger though in the NES version (the MSX games featured only one-screen rooms). Graphics and sound get their job done but are far from being great.

This is a different game from Castle Quest 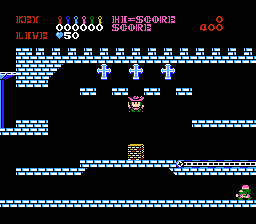