Deadly Towers is a mixed-bag. The gameplay is similar to The Legend of Zelda, with the perspective being a bit more 3D-ish. For a game released in 1986 it looks rather advanced. The graphics are nice, the music is good and the game is huge. The game has major flaws however. Some of them are not uncommon for an early NES game. Many necessary items are very well hidden in non-obvious spots. The difficulty level is too high. In this game the beginning is even the hardest part of the game. Being badly equipped you have barely a chance againts the many monsters. Sometimes when you run over a certain spot you are teleported into a dungeon. And you cannot immediately leave the dungeon, until you find the exit. Making things worse, the dungeons are huge 16x16 screen mazes with many difficult monsters. And only in these dungeons you can find shops where you can buy some better equipment to survive the final seven towers where seven bells are hidden, which you must find and destroy in order to challenge the end boss. Now with a walkthrough and cheat at hand I could avoid the biggest frustration, but I understand people who say that this game is a game design disaster.

teran01 # 2010-08-19 22:27:37
I'm surprised to find this game listed on many 'worst games of all time' lists. Ya, its insanely hard. And true, the character and enemies moves in plain 2D even though the enemies are (not) placed in a weird pseudo 3D non-existent environment. And, I'll admit, generally hidden/invisible entrances are used for required main levels instead of just secret bonus areas. And, ok, 20 hit points for the first enemy encountered in the game that isn't even a boss and doesn't even have a name, and doesn't even have a face, or a brain, or limbs, or multiple colors, is a bit excessive. Oh and instead of finding a way to the remotest part of the dungeons, grabbing the treasure and being teleported out, the player is teleported into the remotest part of the insanely complex dungeons, loses treasures, and must find their own way out. It could be worse, imagine if it had no continue option (which is easily exploited btw.
Start the game, die, then change the first two letters of your continue password to "EF" or "FE".
Wimpy). However, I like it for the challenge, I find the false 3Dishness very retro (by 1986 standards), in a good way. This game proceeded [gameid=9176]The Legend of Zelda[/gameid] and in many ways its better, imo. The size of dungeons and the order of their 'completion' are superior. Deadly towers was actually the 2nd NES game I ever played after Super Mario Bros. It took me about 300 hours to beat. This game gets 4.5 stars by me.
Summary of good points:
Challenging
Save your progress
Enemy Variety
Many Enemies Sharing Screen
Eight-way Movement
Eight-way Attack
Vast world to explore
Many secrets
Permanent upgrades
3Dish
Unique light-up cartridge (Japan version)

Proof that Deadly Towers is easy :) (Deaths were purposeful) 
A Deadly Towers master has made maps for all 
Ultimate Suckage (contains fowl language)? 
Worst game of all time 

"Mashou" is used in official documentation.

Journey through this 3D looking game to collect the evil magic bells from the 7 bell towers and burn them in the sacred flame.

Mashō literally means "Evil Bell" an is a pun of 魔性 which means meaning "devilishness." It was supposed to be titled "Hell's Bells," in English but this title qualified for Nintendo's unwritten censorship rules. Oddly, there are Holy Crosses shown all through the game and the game is pretty blatant that God himself has personally asked the game's protagonists to complete this quest.

This game has a very long crawl screen of text. Possibly the longest crawl of any game previous and I can't think of a longer since. The text mentions that the castle explored in the game is actually under construction. This can thinly justify the level structure.

has influenced
Tomes of Mephistopheles (Linux) 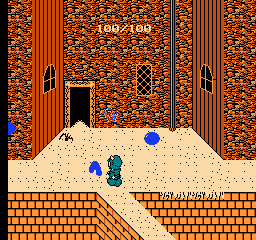 Which way am I falling?