Defender of the Crown


IN THE YEAR OF OUR
LORD, 1149 WHEN THE KING
RETUNED FROM THE HOLY
LAND, HE KNIGHTED SIX
GREAT WARRIORS WHO HAD
CARRIED HIM TO VICTORY
OVER THE INFIDELS. THE
KING'S SUBJECTS CROWDED
THE PALACE TO SEE HIM
GRANT EACH OF THE HEROES
A CASTLE AND IT'S
DOMINIONS
WHEN THE KNIGHTS
DEPARTED FROM THEIR LANDS
ONE MAN, A SAXON, RODE
TO SHERWOOD FOREST ּּּ
[sic]

The in-game story seems to refer to the end of the second crusade and one of the few battles that the crusading forces actually won. Undoubtedly this is backstory and the game is set some time later than 1149 and sooner than 1199 (which is the historical beginning of John of England's reign). Probably the murdered king mentioned is Henry II of England, who actually died of natural causes in 1189; but his health was certainly not improved by the actions of his sons, especial Prince John. Never the less, the in-game date begins counting from October 1149. The game takes much dramatic license. The player is one of the six knights mentioned in the story and all of these knights will be battling for England. 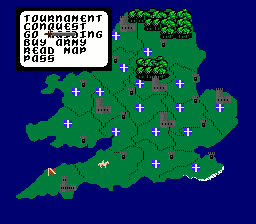 Defender of the Crown in-game screen.