"Dr. Jekyll and Mr. Hide" is often regarded to be one of the worst NES games ever. While I agree that it is really bad I must also admit that I have seen worse games. The concept of the game is unusual. You main task is to get Dr. Jekyll to his wedding. Once you die as Dr. Jekyll the game switches to Mr. Hide into a mirrored nightmarish version of the level. In the Mr. Hide part yo Neeu have to kill enough creatures to get enough power to switch back to Dr. Jekyll. The special thing or problem about this is the fact that once you reach the place with Mr. Hide where Dr. Jekyll died, he will die as well and the game is over. The concept does not work well but was worth a try. The graphics, especially the background graphics are also not too bad. What makes this game bad is the frustrating difficulty level, especially of the Dr. Jekyll part. Controls are bad and when you are hit you suffer a huge knockback. So playability stinks, but as I said at the beginning that was the case with quite some more NES games as well. 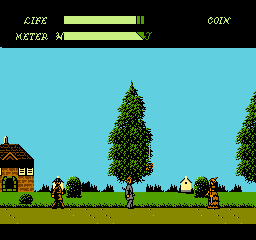