Considering this game was released before Dragon Quest 3, I might say this was the best console RPG on the market at its time, with the exception of Phantasy Star perhaps. Graphics and music were very good, you could choose between plenty of character classes and the game told a good story. Today the random encounter rate with all those monster fights might seem too high, but this was a normal thing with early RPG's.

teran01 # 2014-08-27 17:39:21
The NES game that started it all. Although heavily hyped by Nintendo at the time of its release, nobody could ever have predicted the soaring heights the series would eventually reach in the minds and hearts of gamers. This game probably did more to advance the cause of console RPGs than perhaps any other - which is surprising in retrospect, as the first FF is a stunningly average game. It has virtually none of the depth or character development that later games - including the two other Japanese-only Famicom/NES releases - would later make the hallmark of the FF name. The combat system is nice, but there's better out there for the NES. Plus, it gets annoying after a while, since you're having encounters at just about every step, especially in the later dungeons. All in all, look at the first Final Fantasy as the grade-schooler's notebook sketchings that eventually lead her to become a great artist.

# 2007-01-01 17:25:43
Yeah sure, it looks like crap by today's standards, the story is almost non-existant, there is zero character development, the music is... well... it's an NES for god's sake! But this was my first Japanese RPG (you have no idea how long I had to save my allowance for this) and nothing you say can make me hate it. NOTHING!

* Redone graphics. (Mostly ripped from later games in the series.)
* Redone enemies. (Many are new; some are returning enemies with new properties.)
* Redone magic spells. (Magic is now divided into White, Black, and Time Magic.)
* Redone weapons and armor. (Some armors now increase evasion rather than lowering it!)
* Redone maps. (Most are similar to the original game’s; some are totally new.)
* Redone character class system. (See Read Me.txt for details.)
* Two new pieces of music. (Adapted from Final Fantasy 4.)
* Some other relatively minor stuff.

Get more info at Romhacking.net or Grond's Hacks

The world is out of balance; the elements are in revolt. Four young heroes, each with a darkened orb, must restore order to this chaotic world. Swords and sorcery will aid them on their quest; on this final fantasy.

Trivia:
In the original Japanese version, Link's grave could be found. Nintendo published both Dragon Warrior and its rival [, this game Final Fantasy] in the USA. They changed a grave to Erdrick's, a hero from the Dragon Warrior game. Later editions for other systems restored Link's grave. 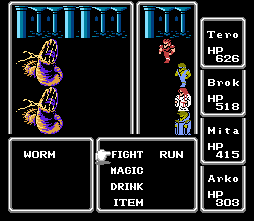