I really liked the original C64 version of Ghostbusters, but this NES conversion is really bad. Why is this so? Well, the goal is the same. You drive around the streets of New York to find buildings infested with ghosts and catch them. Catching ghosts gives money which can be spend on better items like better beam weapons or ghost traps as well as items that come in handy at the "endgame", which consists of climbing a long staircase and battle Gozer. But the execution of all the parts are just not well done. The music is much worse than in the C64 version and its the same Ghostbusters tune through all the game's parts. The part where you are driving to your next destination is nasty, because you often crash against other cars losing money as a result and you have to keep an eye on your fuel-meter. Both annoying elements were not in the C64 version. Also the endgame has changed quite a lot. In the C64 version you had a short action scene with a little ending sequence, while in the NES version one of the most gruesome parts of all time awaits you. You have to climb staircases to the top of a 22-floor building. Moving is done by repeatedly pressing button A. Four ghosts are flying around the screen, which can kill you after a few hits. The ghosts have a very unprecise hit detection and constantly pressing button A makes you curse the person who was responsible for designing this part of the game. Finally on top of the building you have to battle the endboss Gozer. If you want to play a Ghostbusters game try the C64 version or the Master System version, which has nearly identical gameplay as the NES version but with better playability and graphics. 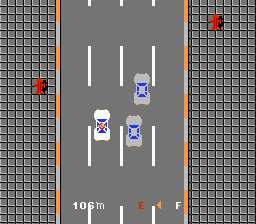