Ikari Warriors is a run and gun arcade game port and very similar to Commando. It is longer and more diverse than Commando. You can even use tanks and helicopters which make the game a bit easier. Speaking of difficulty... the game is really hard. That is not only because you are constantly attacked and several grenade throwing enemies are extremely unfair, but also because of the bad controls. The first two levels have a jungle theme and the last two levels you are in a kind of enemy base. The levels are rather long and boringly designed and nearly impossible to complete if you don't have a cheat method at hand. I prefer Commando over this.

You and a friend are warriors with secret orders to invade an enemy nation. Working together as a team, you must fight for survival against a relentless onslaught of enemies! 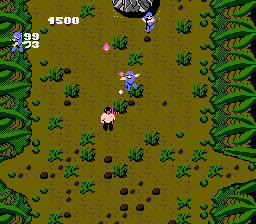