I give this anime-licensed title my respect for being one of the earliest tag team wrestling games. You choose two from eight available players, which are all rather weird looking, although the graphical representation of the characters leaves much to be desired. Also the rest of the graphics are rather plain looking, which in itself is not the most important thing, because it is an early NES/Famicom game after all. More important is the playability, which is a quite bad. The move-repertoire is limited to only a few basic moves. Sometimes a power pill is thrown into the ring and the character who catches it first is enabled to use a super attack move for a few seconds. I found this element too decisive to win a fight.

1 player or 2 players simultaneous competitive.
Despite having on tag team more, a cooperative play mode is not available.

Widely-ridiculed wrestling game based on the popular Kinnikuman series (known as M.U.S.C.L.E. in the U.S.). 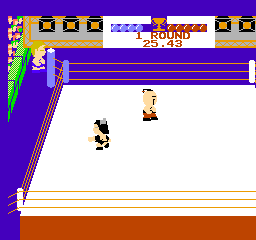