Mappy-Land is a Famicom only sequel of Namco's arcade hit Mappy. Namco left the main elements in place, namely platforms that can be reached via trampolines and you having to collect certain things in each level while being followed by nasty cats. The game is colorful and cartoony looking. The levels are very varied and sometimes contain sub-levels where you have to collect an extra item which helps you to leave the main level. Controls are also OK. The first levels are easy enough, but in later levels when the cats are actually running faster than you the game becomes much more difficult. A good sequel to a cute arcade classic. 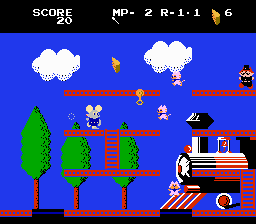