# 2006
(From the Instruction Manual)
BROTHER AGAINST BROTHER!

'Protoman has gone wild! City Hall and the spaceport have been totally destroyed and the city's power grid is in shambles. I've never seen destruction on this scale before.'

'I know you're worried about Dr. Light, but your first duty is to free the city from the grip of Protoman's robots. I can modify your reactor to give the Mega Buster a little more power, but the rest is up to you. Dr. Light and I had been working on a special project, but it's not finished yet. Maybe if I can get it working, it might give you an edge.

'Remember to watch your back Mega Man. Protoman seems to have become more ruthless than we had thought possible. Good luck.'


ATTACK OF THE CYBERNETIC SOLDIERS!

The dark shadows of Protoman's eight robots now cover the city. Each of these cybernetic soldiers have surrounded themselves with wave after wave of mindless metal munchkins who are just waiting to pound Mega Man! It's up to you to run, jump and climb past death-dealing robots and metallic maniacs to get into the robot master's inner sanctum. Once you arrive, you'll dig in and stand toe-to-toe against his awesome attacks! Pummel him with the power of your Mega Buster to throw him on the scrap heap for good. Add his weapon to your arsenal and get ready for action as you face the next robotic level!
---

As you blast Protoman's cybernetic creations to smithereens, you will gain their special weapon and add it to your arsenal. You can view the various weapons you have collected by pressing the Start button. When the weapon box appears, you can see each all of the weapons, energy tanks, mega tanks and extra lives you have collected so far. Press the control pad in any direction to select the weapon you wish to activate and then press the A button. When you return to action, Mega Man will be armed with that weapon.
---

Mega Man isn't the only one who is worried about Dr. Light! Rush and Flip-top are scouring the city for any clue to the location of their loose leader. But, if Mega Man is in need of a little help, Rush is ready to leap to his side. Using his special powers, Rush can transform into a two unique configurations to help Mega Man get by treacherous traps.

Prior to Dr. Light's kidnapping, he and Dr. Cossack had been working on a brand new attack robot named BEAT. Hidden throughout the city are the parts needed to activate this powerful new ally. If Mega Man can collect the letters to spell out M-E-G-A-M-A-N-V, Mega Man can call and activate BEAT.
---

has influenced
Blood of the Werewolf (Linux)

was remade as
RockMan 5 (PS) 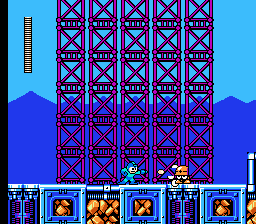