Brahne, the evil Queen of Alexandria, is using highly advanced magical weapons to terrorize neighboring kingdoms. Players follow a group of bandits, knights, and magicians as they try to foil her plans. The heroes quickly learn that her wicked doings are part of a much larger plot, and as they progress, they learn about the sinister motives of a powerful sorcerer named Kuja.
Over 30 million copies of the Final Fantasy franchise have been sold, making it one of the bestselling video-game series ever. This edition offers new characters and 3-D environments, plus a rich story line--one of the hallmarks of the series--as well as a new point-based spell-casting system and an item-based ability-learning system.

# 2007-01-01 17:31:04
My least favorite of the Final Fantasy series, mostly because I found the main character, Zidane, so unlikeable and the art so kiddie. And is it just me or is Princess Garnet (Dagger) just a mini Tifa from FF7?

has influenced
Edge of Eternity (Linux) 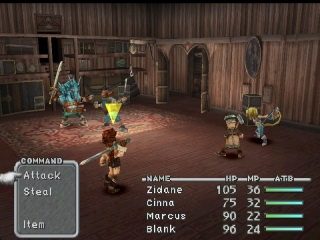