Pac-Man is a classic and it was just a matter of time until it saw a release on the Famicom/NES system. Generally the port is well done, but the gameplay of Pac-Man didn't get fresher over the years.

Move Pac-Man through the maze, avoiding ghosts and eating all the Pac-Dots. Beware, each of the ghosts behave differently. When Pac-Man chomps a Power Pellet, he becomes invincible and is able to eat the blue ghosts. The more ghosts Pac-Man eats in a row, the higher the score. Don't forget to eat the bonus fruit too. Released in 1980, Pac-Man is the most well-known video game on Earth and is also commonly acknowledged as one of the most successful coin-operated games in history. Enjoy this masterpiece of gaming history today.

Tengen published a licensed version of this game in North America. After some disagreements with Nintendo, they published an 'unlicensed' version that did not contain Nintendo's seal of '$10 has been added to the cost of this cart'. After Tengen was court ordered to temporarily stop selling unlicensed NES games; Namco published yet a third version of this game. Namco's version was licensed (and cost more). Also, Tengen and Namco both originated with the old Atari company. They are separate companies, but Tengen and Namco continued to be business partners for many products.

*Dated by the printing on the circuit board (manufacture date). Actual publishing date might be years later. 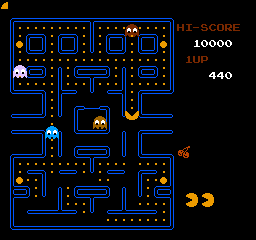