Popeye was one of the launch games for the Famicom/NES system release in Japan. It's a well done conversion of Nintendo's own Popeye arcade game. The goal in each level is to catch all objects that Olive Oyl is throwing down (hearts, notes etc.), while at the same time avoid being catched by Bluto. Graphics are great for a game from 1983 and I still like the gameplay and the different design of each level.

Now you're the King of Spinach in a battle for Olvie's love! Are you ready to climb ladders, jump landings, eat spinach and punch out Brutus, Seahag and the flying Bernard? Because that's what it takes to win Olive Oyl's hand in marriage. You'll score points by defeating your enemies and collecting the "love tokens" Olive drops from her window. The more you collect, the more points you'll score and the faster you'll win her love. But watch out. Around every corner lurks another jealous suitor. You'll have to think with your head as well as your heart to win this fast action love affair!

# 2014-07-14 03:27:34 - official description
Popeye and Brutus are at it again in this video contest for Olive Oyl's affection. As Popeye, you must battle the likes of Brutus and the Sea Hag while you race to collect all of the floating hearts that Olive tosses to you. Once you have Spinach power, Popeye can conquer all, but without it, watch out! [...] Olive throws things and Popeye has to pick them up while avoiding the attacks of Brutus, Seahag and Bernard. In round I, Olive throws hearts; in round II, musical notes; and in round III, letters of the alphabet. Try to pick them all up before they sink in the water. 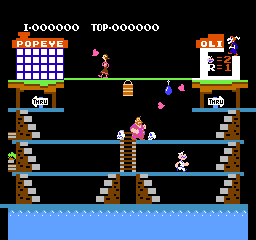