A good early NES game. Not a direct port of the arcade Rygar game, but more something of a re-imagination. Tecmo put a few Action-Adventure elements into the game. Half of it is played in side-view perspective, the other half in a top-down view. The game is playable and the graphics and music have enough variety.

When all the other platforms attempted to convert arcade Rygar, the NES took a different approach. This one isn't like the arcade at all so it deserves a section of its own. It keeps the same Rygar character, the weapon and a few of the monsters but the rest has been redone with a kind of RPG element. At first I didn't like it but then I realized that it was better this than another mess.
The gameplay is more like Black Tiger in that it's a platformer but the levels are up/down scrolling too as well as left/right and you can also find hermits who are willing to help you out (similar to the shopkeepers). The various areas of the land are linked up by a stage with a top down view (pictured above right). The game is energy based and it also hides various special objects which help you such as a crossbow and grappling hook. And no extra lives, when you die, your dead.

The PAL versions user 10-bits of memory each to store the attack and defense points where as the NTSC versions uses 12-bits. This means the maximum of 4000 points is obtainable for NTSC version but the PAL versions cap the player at 1023 points. The latter part of the game and especially the final boss are extremely challenging to beat with these caps. 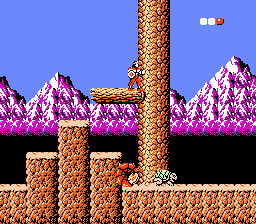