Solomon's Key is a mix of puzzle and platform game. In each level you have to have to find a key which opens the exit door to the next level. With your magical wand you can make blocks appear and disappear. Thus you can free or build you way to the key or exit door. Many monsters roam the levels, which can be killed with limited charges of fireballs. Under many blocks extra items can be found, like extra charges, extra time and so on. In 1986 the gameplay felt fresh and motivating. Biggest problem is the harsh difficulty level. Later rooms not only require good thinking and planning, but also super-fast reactions. Additionally you have a lifemeter, which is actually just some kind of a timer. And the time runs out sooner than you think. 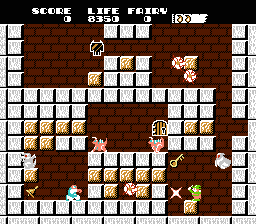