This is a 3-in-1 multicart containing Menace Beach reworked to a Christian theme as "Sunday Funday" and two unique games. There is a karaoke game called "The Ride" featuring the song of the same name by 4Him. It also has a puzzle game called "Fish Fall". This was the last game actually professionally published in the USA for the NES. However, it was unlicensed. While Sunday Funday bears a resemblance to Menace beach, The Ride and Fish Fall were likely original publishings. Fish Fall was developed at Color Dreams under the name Free Fall. Color Dreams was a fully separate company by the time of this game's release and currently going through bankruptcy; but had transfered the rights to all their games to Wisdom Tree (which would later be bought by BridgeStone Multimedia Group). However, there is apparently one known prototype of a a fully finished Free Fall.

This is the absolute last game for the NES to be professionally published in any region. Wario's Woods (1994) would be the last licensed USA release. And Adventure Island IV (1994) the last official Famicom release in Japan 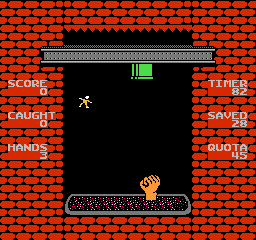