Part of that killer Technos triplet also consisting of River City Ransom and (four-player) Nintendo World Cup. A 'unique sports game,' six-character teams (three in the left half of the court and three surrounding the opponent's half) attempt to drain all the energy of the three in-court opposing characters (shown in the bars at the top of the screen), thereby winning the match. By running up to the line, the three in-court players can deliver special power throws, each player on the team having two different power throws (running and running-then-jumping).

# 2006
I don't care what anyone says--this is the best dodgeball game in existance. Period.

In Super Dodge Ball, you take control of the USA Dodge Ball team and travel the world in an effort to become the best dodge ballers around. Step onto playing fields in countries all over the globe and use a combination of normal and super shots to help take down your opponents. But be careful, as some destinations have surfaces that can affect your footing. Manage the team as you think best, and swap out characters with other players that better fit your playing style. Two players can enjoy a head-to-head game or play a spirited round of Bean Ball, a six-character free-for-all. Three difficulty levels are available (Easy, Medium, and Hard); which one you choose will depend on your skill and courage. Do you have what it takes to lead Team USA to the ultimate prize and win the world championship of dodge ball?

1 player, 2 players, 3 players or 4 players simultaneous.
The Japanese version used the Famicom Four-way Adapter to allow up to to 4 players. The NES Four Score and NES Satellite had not yet been released in the USA by June of 1989, so the NES version was only 2 players and did not include a 4 player option. 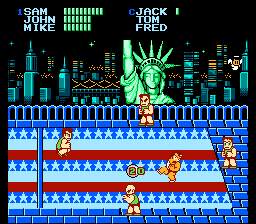