1 player or 2 players simultaneous competitive.
Converted from the arcade game of the same name. While the arcade version had a three player cabinet, this version is reduced to a maximum of 2 players*. Single non-scrolling screen overhead view racing. Tracks gradually increase in difficulty and players must eventually race on the same tracks with obstacles and hazards added. Several tracks features permanent shortcuts, or shortcuts that open and close. Wrenches that appear on the track can be collected and traded to buy top speed, acceleration, and tire upgrades to the player's car. This game has the distinction of having bridges that can be driven over and under.

* This game cannot be considered multi-player deficient. This was published in 1989, North American 4-player adapters would come next year. The Japanese version was translated and published in 1991-08-02 by which time multiple 4-player adapter options were available for the Famicom. But, as the game was already designed, not adding a 3 or 4 player is a perfectly reasonable business decision.

'Designed with pride in Milpitas CaliforniaU.S.A [US Flag]' 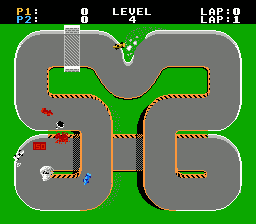