Most important factor with tennis games are the controls. And Nintendo's first tennis game has only average controls. Placing your player correctly and then hitting the ball in the meant direction doesn't feel intuitive enough. Graphically the game is good for a title from 1984. There is a two player mode implemented but strangely only as cooperative mode in a doubles match and no player vs. player mode.

Players slam a serve, fire a blazing backhand and smash a forehand volley on their way to winning the victory cup. Players can choose between five different levels of difficulty, ranging from Beginner all the way up to Advanced. If players want to become true champs, they should be ready to show off their most brilliant lobs and most powerful smashes. Play a singles match or grab a partner for doubles, and then choose an opponent. Players control the moves in tennis action so intense, they’ll almost believe they’re at center court. 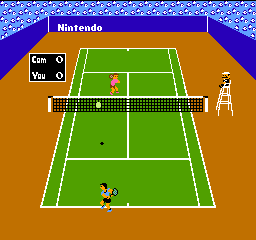