The sequel to "Track & Field" features more games such as fencing and canoeing, as well as updated graphics, but still features both the "button mashing" and "aim cursor and shoot" style of gameplay that is better suited for the Power Pad and Zapper accessories.

The Japanese version of the game is based on the 1988 Summer Olympics in Seoul, South Korea,

Compete in many events of the 1988 Summer Olympics in Seoul. 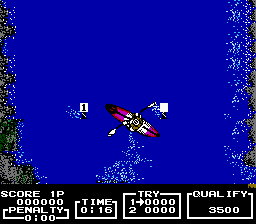