WURM: Journey to the Center of the Earth

The year is 1999.nStrange phenomena has begun to take place on the surface of the earth. Destructive earthquakes and volcanic eruptions have scarred the planet.nMoby the top Commander of the Marine Corps has been selected to Wurm, the Vector Zilus Research vehicle deep into the center of the earth.nGround control has lost all contact with the previous Wurm missions. Now Moby's is the only one left.nBut she's not going in alone. There's an experienced crew you can turn to for advice before you help find her father, who was lost in the last expedition.nWhen the heat is really on, you can make Wurm change forms from a drill tank, to a hover craft, to a Super Jet Fighter, each specially equipped with the latest Weapons 1999 has to offer.nWurm is the ultimate game of adventure because it combines the skill of Role-playing with the exciting shoot 'em up action of the arcades.nMoby and her crew are a long way from home, but even a longer way from exploring all 20 levels that will give you the clues to successfully complete the mission and rescue the Earth.nIt's time to board Wurm.nGoing down anyone?n 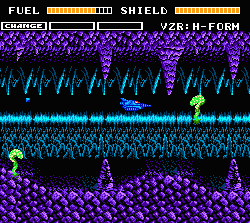 WURM: Journey to the Center of the Earth in-game screen.