A semi-primitive wrestling game that is in some ways a step down from its predecessor, WWF Wrestlemania Challenge. There is quite a cast, with the regular favorites, as well as newer characters like The Undertaker, 'Rowdy' Roddy Piper, and Irwin R. Schyster. However, the number of characters seems unnecessary, as they differ only in appearance and theme music. As the title suggests, players can choose to wrestle inside a steel cage and attempt to escape rather than having to go for the pin. 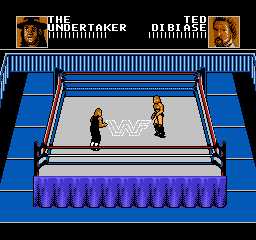