Take one part puzzle game, combine with intuitive game play, add a pinch of multiplayer action and top with a layer of everyone's favorite dinosaur. Mix together and let set for roughly 100 stages' worth of time. If that sounds like a winning recipe to you, then step into the kitchen and get ready for a batch of fast-paced puzzle action. Hunker down to move rows and columns of randomly placed cookies in an effort to align all the cookies of the same type. Successfully assemble a row or column to make the line disappear, then move to a new one. If you're good enough, you may even be able to make a Yoshi cookie appear! Feel like taking on a friend? Fire up the two-player mode, where you can attack your opponent while competing to match as many cookies as possible. Be careful, though—if your timing is off, you could end up attacking yourself. Who knew dinosaurs had such a weakness for puzzle games and sweets? 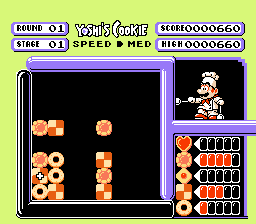