This is the game from which the entire series grew. The timeless world of LOTR/Conan-style fighting was an instant hit with arcade-goers, and inspired a heap of other games that tried to be like it, but failed miserably.

Trivia: (from MobyGames)
'The game is banned in Germany for violence (ban issued on 30.05.92). The game 'Golden Axe: The Duel' is not affected.'
--I have looked into this, and it appears all ports may have been affected, but certainly the Genesis, Arcade, and Amiga ports.
Ban has since been lifted as the content was (apparently), but no longer isn't (apparently), harmful.
Even More Trivia from Mame.dk Golden Axe page
'The kanji [Japanese character] on the title screen actually reads 'Senpu', meaning 'Fighting Axe'. This is an example of 'gikun', where Japanese artists use the phonetic value of a character to determine the game's name, and not the meaning of the character itself.' 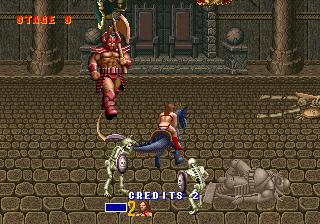