Faceball is a 1-16 player, 3D first-person-shooter. Players are navigate fully 3D walls in a large maze where they hunt each other. In order to play with 5 or more characters, a special cable needs to be constructed by hand as only prototypes of it were made. However, reports persist that daisy chaining 7 DMG-07 four player adapters will also allow up to 16 players. Despite people claiming this, their are no actual reports of any body actually doing it. But this version supports the ordinary GB link for 2 players and the 4 player hub for 3 or 4 players. All players are represented by spherical smiley faces that spit balls at each other, deadly balls. An original tagline for the game was "Put onKILL a happy face" and is meant to evoke humor rather than violence. Unlike the endless string of bloodstorms that would follow, the game's theme was widely considered safe for all ages. It wasn't even censored for this Nintendo version. 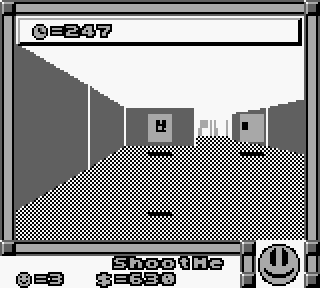