Karateka was famous for its great character animations on 8-bit homecomputers and consoles and the Game Boy version called "Master Karateka" is no exception. But that is also the only positive aspect of this game. It's very repetitive and short. The option to distribute points into categories power, life and speed gives the game a bit depth, but that doesn't even help to become at least an average quality game.

teran01 # 2008-09-02 23:15:02
A Japanese-only port of Karateka to the Game Boy. The graphics are larger and are generally better than the NES version (albeit in black and white). A VS. mode has been added, and you are now given the ability to customize your character's stats (power, life, and speed) at the beginning of the game. The new cut scenes look nice, too. Unfortunately, the hit detection actually seems worse than in previous versions. 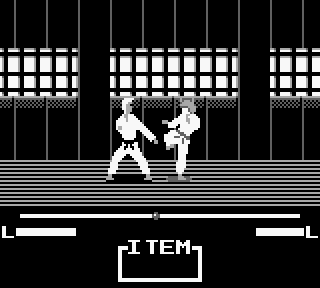