4 people can participate in simultaneous and cooperative play.
(From the game flyer)

Attractive and realistic magic & graphics made possible through the utilization of the SEGA SYSTEM 32.

Due to various highlight scenes, and different course junction points depending on the stage, the player can experience a different excitement each time.

Colorful game actions, such as picking up and using an item, opening the doors, kindling a torch, opening a box, etc., are provided in abundance.
Well that pretty much sums up this game, the greatest of all beat-'em-ups

Trivia from Mame.dk Golden Axe page
'The kanji [Japanese character] on the title screen actually reads 'Senpu', meaning 'Fighting Axe'. This is an example of 'gikun', where Japanese artists use the phonetic value of a character to determine the game's name, and not the meaning of the character itself.'

(Garrett) - # 2006
This is not the same game as Golden Axe II for megadrive. They are completely different.

(zinger) - # 2006
Probably the most under rated scrolling beat`em up of all time, widely passed off as more of the same but nothing could be further from the truth. It improves on the original in almost every way. Ask any [[game:Golden Axe]] fan, this is the best in the series. 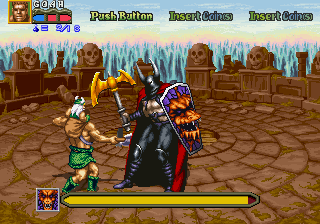