The Legend of Zelda

The NES version of the first Zelda game appeared roughly a year after the Famicom Disk System version and is of course nearly identical. Fine graphics and music, a huge overworld and many tricky dungeons. Complexity combined with good playability makes it a genre defining masterpiece and started one of the most popular game series ever. The Japanese cartridge version was released way after the original release in February 1994, most likely due to the fact that even in Japan nobody used a Disk System anymore at that time. It was also one of the very last Famicom releases.

teran01 # 2010-05-23 15:10:53
Zelda. What more is there to say? Now that the N64 version is out, I hope this one isn't forgotten. I bought this when it came out and it is probably THE best game ever. Out of the NES versions, SNES versions, and this one, this one is probably my fave. The gameplay is amazing, the challenge is kick-ass, the storyline is pretty sweet, and it will keep you glued to your NES from start till finish. Trust me, this one is as good as the N64 version. Even though it doesn't have fancy graphics, the gameplay is unlike any other. You won't be disappointed!!!!

MANY YEARS AGO PRINCE
DARKNESS "GANNON" STOLE
ONE OF THE TRIFORCE WITH
POWER. PRINCESS ZELDA
HAD ONE OF THE TRIFORCE
WITH WISDOM. SHE DIVIDED
IT INTO "8" UNITS TO HIDE
IT FROM "GANNON" BEFORE
SHE WAS CAPTURED.
GO FIND THE "8" UNITS
"LINK" TO SAVE HER.

Gather the Triforce Fragments, collect the weapons needed to defeat Gannon (its says "GANNON" in the game).Rescue the princess. Then do it again (1st Quest, 2nd Quest). This is an appropriately difficult action-adventure with minor puzzle elements and maze like dungeons. There are enemies on nearly every screen to be dispatched by sword, boomerang, arrow, bomb, flame, recorder (flute), and/or magic.

Originally released 1986 on the Famicom Disk System, the game was "ported" to cartridge and brought to the western world a year later. In 1994 a cartridge version was created for Japan also.

You can stop and save your game at anytime without dying. Press start to go to the sub-screen menu. Then on controller 2 press ↑+A. This is often incorrectly regraded as a 'secret'. But in reality, its written in the game instruction booklet.

Tags:
The first game in the Legend of Zelda series. Miyamoto has stated that Mario and Zelda titles were intended to be playable animated cartoons. A character in the game, Zelda, is kidnapped by the antagonist in the hopes of forcing her to reveal a secret. One of Link's goals is to rescue her. Link can obtain a bow and shoot arrows at enemies. Damaging an NPC causes balls of energy to be launched at Link from out of fires. Miyamoto is a Shintoist and has publicly acknowledged incorporating Shinto into the Zelda games. This cartrige include 3 save slots via battery backed Save RAM. When played on a NES deck modified for stereo or an emulator with stereo, many have noticed that this game seems to have been designed for it. Their are Christian Crosses on Link's shields and on gravestones which has been shown to be against Nintendo's Content Guidelines by other games which have had Christian Crosses censored.

ported to
The Legend of Zelda (GBC)

prequel of
Zelda II: The Adventure of Link (NES) 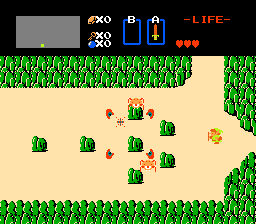 The Legend of Zelda in-game screen.