Fantasy Zone is one of the early Shoot'em Up Games from SEGA.
Introducing Opa-Opa, the Hero of the Fantasy Zone, you have to destroy several floating Monster Generators in order to get to huge Bosses and to free your friends and the whole Fantasy Zone from the Invasion of Aliens. Earn money by destroying Aliens, and use that money to power up Opa-Opa with all kinds of neat things like Lasers, Turbo-Engines, Big Megaton Bombs and stuff like that.

In my opinion a great game, the difficulty is the only bad point about it, since it's quite tough to beat your foes. But, once you get into the gameplay mechanisms you won't stop so easily.

Take command of the spaceship Opa-Opa and blast your way through various fantastical levels as you try to take out all the enemy bases in each stage. Once you've destroyed the bases, you'll have to beat the stage boss in order to move on to the next level. By using your guns and bombs wisely, you'll be able to take down your enemies and explore each of the crazy environments in this side-scroller. You can also buy upgraded weapons for your ship by accessing the shop. Various Sega games through the years have referenced the Opa-Opa-now you can play the game that started it all. 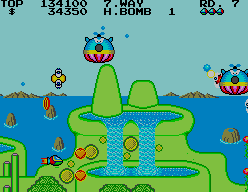