Space Harrier was originally released in the arcade in the 1980s, developed by AM2, which also developed OutRun and Afterburner. Space Harrier is widely recognizable by many arcade fans due to its distinctive, colorful art design and its fast-paced action. The SEGA Master System version is considered a solid port of the arcade game, containing 18 levels of intense fun. As the "Space Harrier," you must fight your way through "The Land of Dragons" and defeat the bosses at the end of each level to restore peace to the land. Are you prepared? Get ready! 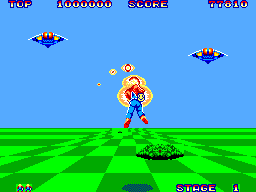