Hyper Sports, known in Japan as Hyper Olympic '84, is an Olympic-themed sports video game released by Konami for arcades in 1984. It is the sequel to 1983's Track & Field and features seven new Olympic events. Like its predecessor, Hyper Sports has two run buttons and one action button per player. The Japanese release of the game sported an official license for the 1984 Summer Olympics.

The gameplay is much the same as Track & Field in that the player competes in an event and tries to score the most points based on performance criteria, and also by beating the computer entrants in that event. Also, the player tries to exceed a qualification time, distance, or score to advance to the next event. In Hyper Sports, if all of the events are passed successfully, the player advances to the next round of the same events which are faster and harder to qualify for. 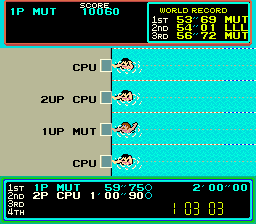