Alex Kidd in the Enchanted Castle

A poor excuse of a platformer with some gambling. Music is boring and repetitive and the design of levels seems made with copy and paste.

AmunJazz # 2014-07-18 19:39:05
Similar to 'Alex Kidd in Miracle World' with many of its elements making a reappearance (helicopter, swimming, motorbike and even the last level). The game is quite good, but I didn't like the 'Rock, Paper, Scissors' game because it is too much based on luck. The overall difficulty level isn't very high though and the game is rather short.

teran01 # 2012-10-06 11:08:39
Alex Kidd was quite popular on the Master System, so it was just a matter of time until we could play a Mega Drive Version.
And here it is, a new Alex Kidd Game. First of all you see the nice graphics, which are close to the Original but use the power of the Mega Drive in Terms of Sprite Size, Animations and overall presentation.

The Game itself isn't that great, the changed to much from the classic and messed up a fine game.

The Janken Game is now everywhere, the Bosses don't follow a system, the Controls aren't so great either and the Song Remixes don't fit.

Fans of the Master System Classic will be dissapointed, everybody else who wants a good little Plattformer will propably like it.

When King Thor was kidnapped, his son, Alex Kidd, held out hope that his father would return to their kingdom on Planet Aries. Finally, it was revealed that he was being held captive on Planet Paperock. As Alex, players race to his rescue through 11 levels, battling enemies and avoiding obstacles while winning coins that will buy special items and vehicles. At the end of each level, players encounter a boss and enter into a match of "Rock, Paper, Scissors." Throwing the right symbols puts players ever closer to bringing King Thor home; throwing the wrong symbols squashes them beneath a heavy weight.

AmunJazz # 2014-08-27 23:51:40
Also included in Classic Collection (aka Mega Games 4-in-1), released in Europe in 1996 and published by Sega, rated ELSPA-3, that included Flicky, Gunstar Heroes, Altered Beast and Alex Kidd in the Enchanted Castle. 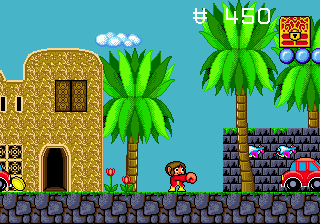