As Epsilon-Eagle, you are an alien soldier who has been genetically engineered to produce maximum intelligence and strength. You were once a member of the criminal organization Scarlet, but when you decided to break from the group, you were forced into a showdown with Scarlet's new leader Xi-Tiger, who kills a hostage in his attempt to destroy you. Now it's up to you to take revenge against the bad guys in this side-scrolling action game! Choose from six different weapons and battle the bosses of Scarlet until you reach the final confrontation with the ultimate secret weapon! 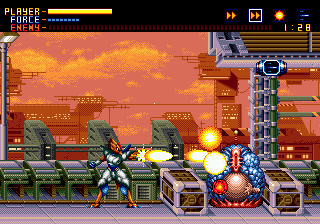