Enemy Chron cyborgs are attacking Earth and its space bases with lightning fury. Everyone you know and love is about to be captured and turned into cyborgs by Chron . . . unless you come to Earth's defense.
You are Rex, Commander of the Earth Defense League - ASSAULT SUIT UNIT. The Assault Suit is twelve feet of mechanized plated battle armor. Inside you control the most powerful weapons known to man. But . . . your enemy is half machine!
The story of Target Earth unfolds through eight separate missions of combat fun, action and excitement. From the battle for control of Jupiter's Ganymede Space Base to the final destruction of the Chron Flagship, each level confronts you with awesome challenges and discoveries.
Complete all eight missions and you will save Earth and uncover the true legacy of Chron. But fail and Earth will become a robotic nightmare. With Target Earth, the power to win is in your hands!

censored — "scene where a comrade doesn't make it back to the ship (and burns up in the atmosphere) was removed" from the U.S. release. 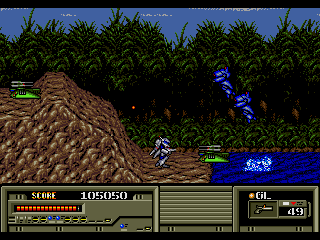