As below, it's Rastan with sweet graphics. Still doesn't hold a candle to Golden Axe though, and neither did Rastan. Cool name though.

The girl in red is EVIDENTLY a full ripoff of Golden Axe's Tyris Flare.
[Garrett]

Beam Software's stab at a Rastan clone has you playing your pick of three fighters (valkyrie, barbarian, wizard) as you side-scroll your way through hordes of enemies on a mystic quest for the usual bearded deity.
A fantasy-themed platformer that rises above the crowd due to its excellent graphics and sound. It's too bad that the gameplay is only passable at best. Think of it as a 2D Golden Axe, and you'll begin to get the picture.

The evil Dark Lady has unleashed an onslaught of barbarians and beasts upon the land, and it's your duty to come face-to-face with all that she can throw at you in an attempt to protect your homeland. In BLADES OF VENGEANCE, you can choose your gladiator from three different classes: Huntress, Warrior, or Sorcerer. Each character has its own special powers and abilities, so you'll have to decide which one best fits your fighting style, and then get ready for the fight of your life! Along with your standard weapons, battle-axe, rapier, mace, crossbow, and fireball, you can also make yourself invincible with special armor and weapons that are strewn about each of the eight levels. If you've got the strength and courage to defeat all eight of the bosses, then you'll have a shot at the Dark Lady, are you ready?

"Softpedia guarantees that Blades of Vengeance 1.0 is 100% FREE" But I can find no other information about the copyright status of this game. They provide a PC installer package that includes the Blades of Vengeance ROM, Fusion 3.51 (a Megadrive/CD/32X/SMS/GG emulator), shortcut icons, and start menu items. Softpedia's source seems to be a 3rd site and all indications are that this site is blatantly involved in piracy as no definitive statements by any authorities are referenced.

For a guaranteed 100% legal option to play this game on your PC, use Console Classix 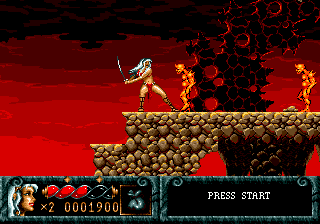