Mobo and Robo Bonanza are enjoying their favorite television show when the picture crackles and the shadowy figure of a mysterious stranger appears on the screen. This figure asks them to collect certain items that he has placed inside various buildings to test his security force. If they return the items successfully, Mobo and Robo will be rewarded. The two of them state that they will get the job done in just three minutes. However, little do they know that each building is packed with security guards who will raise the alarm if they are caught red-handed. Fortunately both Mobo and Robo are equipped with bullets that can knock the guards unconscious for a few seconds. A huge reward will be given out if Mobo and Robo are apprehended. Help the infamous Bonanza Bros. infiltrate a number of different locations ranging from banks to mansions to casinos, and don't get caught.

One or two players can try their hands at being bank robbers, who have to dodge security guards and all kind of traps to get the loot. Has a rather distinctive graphics design found only in a few other games. Slow paced, but can be quite challenging at times.


Directly from the manual:

Badville is the home of the infamous thieves known as the Bonanza Bros. Badville is also home to several corrupt business operations. The Chief of Police has enlisted the help of the Bonanzas in cleaning up his town. If they don't cooperate, he's threatened to throw them in the cells to rot!

You must guide the brothers, Robo and Mobo, through ten different locations and gather incriminating evidence as you go. Success means that the Bonanzas stay out of jail! So help the Chief to turn Badville into Goodville, and the Bonanza Bros. to remain free! 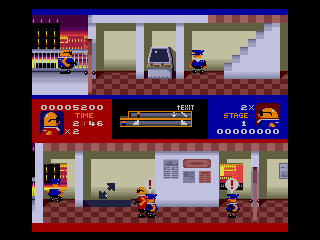