Chester Cheetah: Too Cool to Fool

Chester Cheetah is the smoothest cat in the zoo, but when Mean Eugene steals his motor scooter...Chester loses his cool. Now it's up to you to help Chester get his revenge on Eugene and get his scooter back. You'll have to make it through mazes, platforms, and puzzles to find the clues that will lead you to the prize. Along the way, you'll also encounter plenty of enemies that stand in the way between looking cool and being a fool. So, if you're good enough though, Chester will have the last laugh.

# 2017-11-28 17:52:30 - official description
Put yourself in his paws. You're a cool cat. So, you would like to be treated like that. But No! You're stuck in a zoo with nothing to do. Mean Eugene, the Zoo Keepin' Fiend has planned an ugly scene. He wants to nail your tail without fail. So, he steals your wheels to cool your heels. Then he hides the parts in the zoo just to fool you. And, that's just the beginning in Eugene's way of winning. But, stay cool and you can rule. Just find your bike and you can go where you like. The rule is cool.
Remember a cool cat is just...
TOO COOL TO FOOL 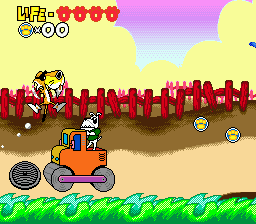