- As a skilled professional soldier, trained in anti-terrorist tactics, you have been hired by the U.S. Government to assist in a top secret operation. While touring central africa for world peace, the former President of the United States was taken hostage by a group of revolutionaries. Due to diplomatic reasons, the U.S. Government cannot send military intervention. Instead, an elite corps of Mercenaries known as the "MERCS" habe been selected to rescue the President and stop the rebel's attempt to take control of the country Zutula. As a member of the Mercs, your mission awaits!
- Joseph Gibson: Former Green Beret in the 7th Airborne. He has mastered a large variety of weapons. Now he is a Merc.
- Howard Powell: He was made the leader of a special terrorsit task force and finally broke off and formed the Mercs in 1985.
- Thomas Clarke: Joined Air Force where his talents were noted early. Strong in mechanics and weaponry. Moved to Mercs in 1986. 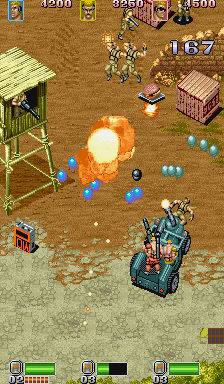