Perfect Dark is a first-person shooter developed and published by Rare and released for the Nintendo 64 video game console in 2000. It is the first game of the Perfect Dark series and follows Joanna Dark, an agent of the Carrington Institute research centre, as she attempts to stop an extraterrestrial conspiracy by rival corporation dataDyne. The game features a campaign mode where a single player must complete a series of levels under certain difficulty settings to progress through the story. It also features a range of multiplayer options, including a co-operative mode and traditional deathmatch settings with computer-controlled bots. 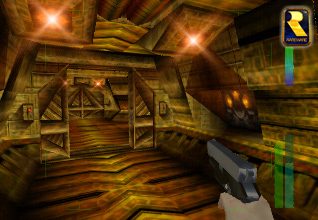