Desert Strike: Return to the Gulf

The military despot General Kilbaba has threatened to destroy his enemies, including the United States. You have been given orders by the President to embark on a series of pre-emptive strikes. Pilot your Apache attack helicopter through hostile terrain, as you seek to destroy any enemy vehicles you come in contact with. There are a large number of power-ups that will help you with this task, and saving your allies will give some nice bonuses as well. If you can complete all of the missions, the world will have no reason to fear General Kilbaba in DESERT STRIKE: Return to the Gulf.

similar to
Battletech: A Game of Armored Combat (Mega Drive) 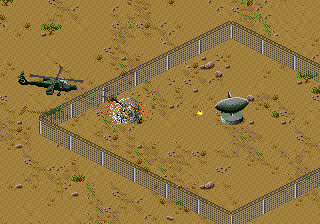