A good but not outstanding shooter. It takes a few minutes to get used to the 360° controls of your weapon until you are really in control of your shots. The controls always stay a bit tricky though and sometimes its hard to find the right angle instantly, which can have fatal results, because there is lots of action on-screen. Graphics are well done. There are a few slowdowns that can occur when the screen is overloaded with enemies and projectiles. The music is not that much of a hit, but that's a matter of taste. The Mega Drive version only features seven of the nine original arcade levels. Nicest feature of the game is the two-player simultaneous mode, which is really fun and makes the game much easier.

FORGOTTEN WORLDS is a one- or two-player side-scrolling shooter made by CAPCOM. It was one of the first games to incorporate 360-degree aiming and shooting. This SEGA GENESIS version provides the same impact and intensity of the classic arcade game. In the 29th century, without warning, warships broke through the sky, loaded with fiendish aliens. They rained down fire, bombs, missiles and napalm, leaving the land barren and inhospitable. Humanity was enslaved and Earth became known as the Forgotten World. In a hidden place, a group of brave humans raised two male children in secret. They brought up the young men as warriors, training them for battle. The two warriors emerged as armed machines of might, strength and super power – the Nameless Ones. Fight the hateful invaders as the powerful Nameless Ones. Collect Zenny to upgrade your weapons and satellite, and free the planet. 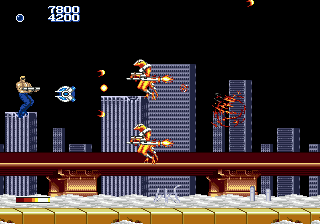