The Greatest Adventure of all time is now the first game available for Sega Genesis' 4-player adaptor. Gauntlet IV lets you join forces with up to three other players in the Quest mode of this classic adventure!

So if you think you're ready to challenge more than 90 levels of labyrinths and mazes, step up to Gauntlet IV...and bring your friends—because four players are better than one!

# 2014-12-15 09:04:45 - official description
One of the first game available for the four-player adapters, Gauntlet IV lets you join forces with up to three other players on the quest of a lifetime. With absorbing gameplay, superb graphics and powerful music, this mystery stimulates the grey matter and sends the adrenalin pumping through your veins.

1 player, 2 players, 3 players, or 4 players simultaneously.
Original Gauntlet, added quest mode, and battle modes. The quest mode includes character development and item collecting. Cannot be 100% completed unless you have 2 or more players. (one player can awkwardly control two characters with two controllers in order to complete the floors that need two or more players). Also introduces a password system for resuming games or transferring characters between games. This features can also be used to change character class. This is THE greatest ever Gauntlet port. In fact it even rivals the original arcade because of its password resuming and the dramatic ending of Quest mode. It has full sound and voices.

Earth with dragon only X41EG 34=HC 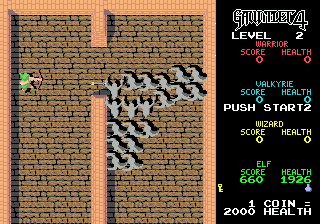